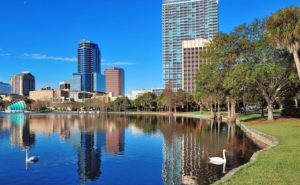 “Here in Orlando we are taking a stand to unapologetically defend the rights and dignity of our immigrant community and reject the practice of terrorizing innocent families by doing what we can to stand firmly opposed to ICE, who seeks to stoke fear, criminalize immigrant communities, and disrupt the moral fabric of peace in our home,” said Christopher Cuevas, Executive Director of the Central Florida based LGBTQ+ immigrant rights advocacy organization QLatinx.

Plaintiffs are represented by the Southern Poverty Law Center, the Community Justice Project, and the Immigration Clinic of the University of Miami School of Law.

This lawsuit, filed in federal court in the Southern District of Florida, seeks an injunction stopping any further implementation of the law, which went into effect July 1. The suit argues that several sections of the law are unconstitutionally vague, preempted by federal law, and violate the equal protection clause of the 14th Amendment.

“This law does nothing for Florida’s safety and actually does more harm than good,” said Thomas Kennedy, political director for the Florida Immigrant Coalition. “ When immigrants are forced to live in the shadows, it has a negative effect on all Americans.”

“Our police are responsible for maintaining public safety,” said South Miami Mayor Philip K. Stoddard at a special city council meeting where the city voted to join this lawsuit. “And as soon as they are seen as somebody who might turn you in if you call for assistance, they are no longer trusted.”

When local police are de facto immigration agents, it empowers abusive employers and domestic partners to threaten immigrants.A relationship of trust between Florida’s immigrant community and government agencies is central to the public safety of the people of Florida. This trust is threatened when state and local agencies are entangled with federal immigration enforcement. Whether it’s accessing a hurricane shelter, hospital, or reporting a crime, SB 168 places immigrant communities in fear of accessing vital services.

The full complaint can be viewed here.

A video on the flaws of the new law can be viewed here.

Contact: Rebecca Sharpless/Immigration Clinic of the University of Miami School of Law
rsharpless@law.miami.edu/ (305) 798-5604

Call us for an initial consultation today